Disclaimer: I was given Love Fed for free to review. I am not being compensated for this post. All opinions are 100% mine. Book link is Amazon affiliate. If you click and make a purchase, I might make a few cents. 😉 Welcome to a special Thirsty Thursday! Guys, I love raw food. Like love, love, love it. Melon, strawberries, blueberries, bananas, tomatoes, spinach, romaine and Boston lettuce and so much more. I believe that is where my love of gardening comes in. I recently mentioned I had started Weight Watchers so that I could reclaim my Lifetime status. One of the ways I made Lifetime was eating a more plant-based, vegetarian style of eating. I eat a lot of raw foods then but I had no idea about a 100% raw food diet until a few years ago when I was contacted by a company to copywrite some material on raw food diet.

The whole raw food movement really fascinates me. I don’t know if I could do it as I live in a winter state where prices skyrocket for fresh farm foods in the winter months and a lot of them are very hard to come by. I am however, interested in adding more raw foods to my diet. That is why I was thrilled when I saw Love Fed of the review block and was later contacted to see if I would like a copy of the book to review.

YOU BET I WOULD! I love my cookbooks and I love the ones with good stories in them even more. While I was reading Love Fed on the iPad I just felt sad and wish I had the actual book. So, yeah, I kinda did a happy dance.

ummmm and for the record – not all raw food is raw. Some of it is cooked, but only to a certain temperature. So, it’s not like its rabbit food 😉

There is just so much to read and enjoy in this book. I seriously have made a note to try just about everything in it. So many yums.

It took me a while to zero in on something to try for this post. I finally settled on the Spice of Life Shake. I picked this shake because I was intrigued by the ingredients. It has grapefruit in it. I’ve never done a juice or smoothie with grapefruit in it. I had one left, so I decided to get it done.

Per usual I didn’t follow the recipe directions to the T. I didn’t juice my grapefruit or lemons and I didn’t use store-bought juice. Her recipe called for juice. I’m lazy I guess. I just peeled them and stuck the whole thing in the blender. Blender, not juicer. Plopped in my 2 frozen bananas, eyeballed the raw honey, added the vanilla, grated in some ginger (I like lots) and shook out the cinnamon. The concoction sounded gross to me too and as I sat there looking at it in the blender I had worried I had gotten myself in to a mess and it was going to go down the drain.

Hmm..that one was a little better.

Once you get over that initial shock that its grapefruit AND lemon it does sort of grow on you.

By my third sip I was loving it and really sad when my glass and blender were empty.

It has a lot of zing and I loved all the health properties from each of the ingredients.

The honey and the vanilla gave this gem a WW PPV of 4. But you could use 1tbs of honey instead of 2 and replace that with some stevia if you would like. Honey and stevia aren’t really considered raw (unless you’re picking the stevia right off the plant yourself and using it. But, Christina does explain the use of honey in her book.) 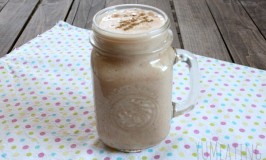 Here is sneak peek inside Love Fed as Christina has so graciously allowed reviewers to share a recipe right out of the book. Because it’s March and I am still ‘wearing the green’ for Irish American Heritage Month, I thought it would be a lot of fun (and good health) for me to share her Frozen Coconut Key Lime “Cheese” Cake Bars. Christina Ross
I spent many of my formative years in Florida, where Key limes are abundant. They are smaller and sweeter than the common limes sold in most markets. If you can’t find them (but try to— they’re very special!), a regular lime will do. This recipe also calls for agar agar, a natural gelatin derived from algae. It can usually be purchased where baking and cooking supplies are sold and, of course, can always be found online.
4.75 from 8 votes
Print Recipe
Prep Time 20 mins
Total Time 20 mins
Servings 6

Be sure to grab your copy of Christina Ross’s Love Fed – even if you aren’t a raw foodie. There are some amazing desserts in here. I have a feeling I’ll be experimenting all spring and summer!

What your favorite raw food?