You are here: Home / Recipes / Apples, Apples, and Apples….Oh My! 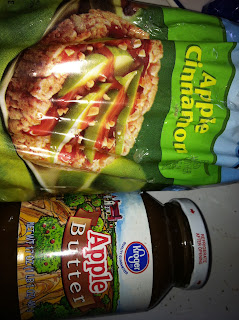 In my quest to find low point snacks that still taste good and satisfy me I was reverted back to childhood when looking back at old weight loss journals and life journals. For those that may not know, I was on Nutrisystem when I was 15 years old. Given that I am now 36, you know things have changed.

Sadly, my struggle with weight has not.

Then back on Nutrisystem.

Anyway, when I did WW the first time, one of the things that got me through snack time was Quaker Rice Cakes. I had never tried the Apple Cinnamon flavor but since my local close-out store had them for a mere $0.69 I just had to give them a try. They were a little dry for me. More-so than the other varieties I have tried. Not wanting to put them in the garbage I had a memory flash of when I used apple butter as a kid on Nutrisystem because butter/margarine were a no-no, and Butter Buds just did not work on everything (no spray butter back then).

A quick stop to Kroger to pick up a few things and the apple butter was about $2.

It’s not homemade apple pie, but it sure was a simple, yummy, happy snack. It’s actually something I could easily give to lil m too!

Do you have any rice cake recipes? How about smart snacks?