You are here: Home / Recipes / Cast Iron Cooking / Pork The Other White Meat with Pretty Colors in the Cast Iron Skillet 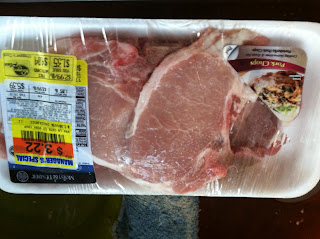 I never pay full price for meat.
Never.
Ever.
When you feed the two people that I have to feed you will understand why.
Here we have sale package of pork chops – bone in. 3 pretty large chops for $3.22
I like pretty colors so I am going to add some bell peppers. 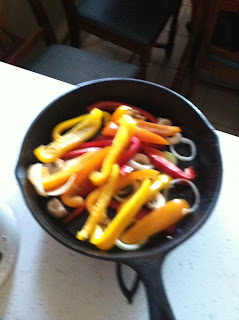 I’ve also tossed in some mushrooms and onions. I have yellow, orange and red bell peppers. One of each.
The others I tossed into a saute pan. I like to do batch cooking so when I am cutting I usually have two pans going that way I have a pizza topping or side dish to use later in the week. 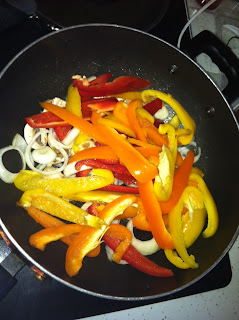 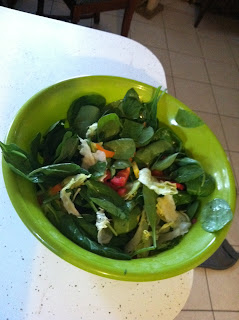 After I have the bottom layer of vegetables in the pan I add the pork chops, which have been seasoned with salt, pepper, garlic, onion, a splash of lemon juice and Worcestershire. 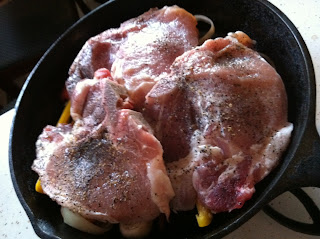 The I add another layer of colorful peppers. 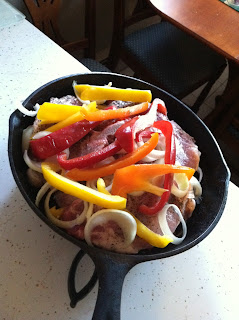 I cook these in the oven on broil. I flip every 2-3 minutes depending on the thickness until they are done to my liking.

For this dish these bell peppers were given to me for free from my mother-in-law who buys in bulk. All I had to pay for were the mushrooms ($2 package which I split between the saute pan and the skillet, onions – $3 for 10 and I used 4 between the cast iron, salad and saute pan. Then the $3.22 for the pork chops)

All vegetables are zero points.
Ultimate Value Diary says the pork chop has 3 PPV for 4oz.