I’m in love you guys.

No..no. Not with my husband.

Yes, obviously, but that’s not what I am talking about.

I’m in love with this Gorgonzola Butternut Squash Mac and Cheese. I may never looks at macaroni and cheese the same again.

This may also be the most difficult mac and cheese I have ever made. It wasn’t hard but it was a step up from boiling water and adding cheese, milk and butter.

I blame a book called “The Melt.” Ever since I have read it I have been dying to make some fancy smancy mac and cheese. Second, I was not sure I was going to be able to pull this off because the husband is not a fan of squash and kiddo might just follow his lead. She is pretty good about trying everything once, but I was afraid the squash and strong cheese combo might make her turn her nose up. 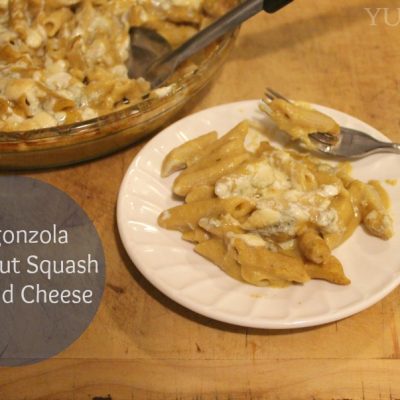 I have to tell you this dish was worth the effort. When I made it I did not tell the husband what the secret ingredient was. I had hoped it would not taste so squashy so that he might actually like it. Well, even though (to  me) it does not taste like squash at all he didn’t like it. He did however appreciate the flavor combination but he “just doesn’t like squash.” I gave some to kiddo and she looooooved it. However, the cheese got to be a bit much for her 9 year-old palate. I did give her some more from the bottom of the pie pan and she happily ate it. I think next time I make it I will make a little pan with no cheese just for her.

I can certainly see myself making this again, but maybe not a whole box. I was eating the Gorgonzola Butternut Squash Mac and Cheese for a week. One week ago: Guinness Grilled Shrimp

One month ago: Vegetarian Grape Leaves