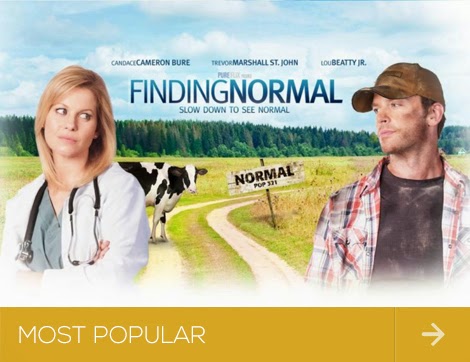 Are you looking for quality family entertainment? I know I am. While we do have subscriptions to Hulu and Netflix and we use the free service Crackle, it can be hard sometimes to find something new to watch with kiddo for family movie night that sends a positive message.

I watch a lot of video websites and often wished their were places like those (similar to YouTube, but much more inspiration and positive) that had nothing but movies instead of videos which are mere minutes long about animal rescue and things that make my heart sing.

So, when I was approached to try gMovies, I didn’t hesitate.

Setting up the account was a breeze. I smiled when  I saw a photo of Sean Astin smiling back at me. I grew up watching all of his movies and loved him in the Lord of the Rings movie series. So, I had to watch Amazing Love. When that was over I saw another childhood favorite, Kirk Cameron (Growing Pains) little sister Candace Cameron Bure (Full House.) So, I started to watch Finding Normal and it was such a GREAT movie.

Fans of the ABC Family series Switched at Birth will be happy to know that Lea Thompson has a few movies available on gMovies that I haven’t seen elsewhere.

While I wasn’t able to stream it on my PS3 , Roku or Western Digital (and if I could, I did not see an app) I can watch it on my iPhone and iPad (it is also available in the Google Play market.) You can also stream on the computer. Which is what I did. I have Chromecast so I was able to stream the laptop to the television for living room viewing. If you don’t have Chromecast you can also hook your laptop up to your television with a HDMI cable – if you have a newer television with that plug port. 🙂

gMovies offers 300 faith and family friendly movies in ever genre. The site is powered by UP television channel and is only $4.99/mo. No contract. No commitment and you can cancel anytime. The website also hosts information about Dish users and the ability to get gMovies on their satellite.

If you are interested in trying gMovies for yourself, I can offer you a FREE 2 Week Trial just by using the code: FREETRIAL7  Head over to gMovies to sign up for your free trial.

I am also hosting a giveaway! Yah! We love giveaways, right? One lucky winner will receive a 6 MONTH subscription to gMovies!

You guys are going to love it!