I’m excited. Can’t you tell? Kiddo didn’t go see her mom or siblings over the weekend so we decided to celebrate St. Patrick’s Day since her father and I will be celebrating all day long on Tuesday while she goes to school and hangs out with grammie and/or her friends.

Normally we enjoy corned beef and cabbage or what we call around here, Boiled Dinner. It’s a family tradition from my mom and her parents. We also make Irish Soda Bread.

Corned beef (brisket) is expensive. Normally I am on top of things and I take a 45 minute drive to a store that sell it year-round at discount. I buy a few and freeze them for when the mood strikes. Sometimes I cook the meat without the ‘corned’ seasoning packet and just have simple brisket. I haven’t had a chance to get out that way and the few stores around here are selling these really small pieces for $20. Ummmm no. That is just not going to happen.

When we got snowed-in up in Traverse City, we did manage to make our way down the road to stop in at the market for some snacks. I picked up this little Irish Pub Food recipe booklet. That is where the two recipes I am sharing come from. The Irish Stout Chicken I ended up cooking a little different from what the recipe directions said to do. I didn’t have the right size pan. So, I fried the chicken in the pan as directed, then I put the chicken on a baking sheet and baked it in the oven. We love twice-baked chicken (I have to make the legs and thighs twice baked otherwise I can’t get past the texture) so this wasn’t a big deal. I left the chicken juices and oil in the bottom of the pan and continued to make the recipe as directed. Then when the chicken was done and had that nice crispy layer that we like, I transferred it back to the pan for a bit so it could absorb some of the flavors from the vegetables and seasoning.

Husband loved this whole recipe. Kiddo loved the chicken. She wasn’t a fan of the parsnips though. But that’s ok, she loves so many other vegetables I am not going to complain. She did eat the carrots and peas. Champ is the cousin to mashed potatoes or the step sister to Colcannon. Champ is native to Norther Ireland (think Belfast.)

This Leek and Chive Champ wasn’t made by the books. I tend to do that a lot. I purchased the leeks with the idea I was going to make a batch of potato leek soup and then use the rest of the leeks for this recipe. I kept putting it off and then my poor leeks started to look a little worse for wear. I stuck them in a cup of water and when I got a bit of time I went ahead and sliced them up; cooking them according to the recipe instructions. I then put them in a container and saved them in the fridge until I was ready to make the champ.  Then I sort of boiled the potatoes, mashed them and added the chives / green onions and warmed up leeks.

The original recipe called for 3 potatoes and 2 leeks. We used 4 potatoes and 3 leeks. I would change it though. Kiddo wasn’t a fan. It was to onion-y for her. She likes leeks but it was a little too much for her in the potatoes like this. Hubs was the same way. I actually liked it, but felt we could cut the leeks down. So, for next time, I am going to do 5 medium potatoes and maybe 1 – 2 leeks. I would suggest the same for you, too. Unless of course you really like leeks 😉 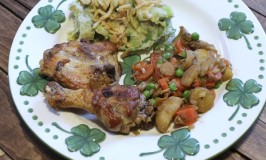 The last few times we’ve made soda bread I have used my standard recipe of equal parts whole wheat flour and white flour. I find that this helps me with less stomach distress and helps to keep the glycemic index a little lower. We were out of whole wheat flour, so this is my other traditional recipe. My husband favors this recipe the most. He says it also reminds him of traditional Viking bread. It reminds me of the bread they eat in the Hobbit and LOTR movies. I guess, in theory it is probably the same 😉 I also love cooking mine in the cast iron skillet. It just seems to work better than a round pan. What are your plans for St. Patrick’s Day; any special meals?