While working my way through the green smoothie challenge I played around quite a bit with some recipes. But one of the recipes I just couldn’t get myself to drink on a consistent basis was anything that had to do with peanut butter. I know you are asking, “whats wrong with peanut butter?” Well, nothing really if you can find an all natural kind that is not all loaded down with sugar. As someone who watches carbs, even the good ones, too much of even a good thing can send my body into craving overload.

I didn’t want to do that because part of the smoothie challenge (at least for me) was to shed some weight in the process.  I also wanted a green smoothie that wasn’t quite so green.

I noticed others were using chocolate almond milk, fat-free chocolate milk or other chocolate milk. I wanted to stay with a water base so I knew I was going to have to get creative and I was bound and determined not to resort to chocolate pudding mix.

What followed were a few hits and misses. But this particular recipe turned out so amazing it is this months Recipe ReDux for the theme ‘Hot Beverages.’

Green smoothies are extremely popular right now, but we don’t all want it to look green or taste green.

Personally for me this was a nice dessert. I’m also thinking about freezing some and then blending it for an ice cream treat. 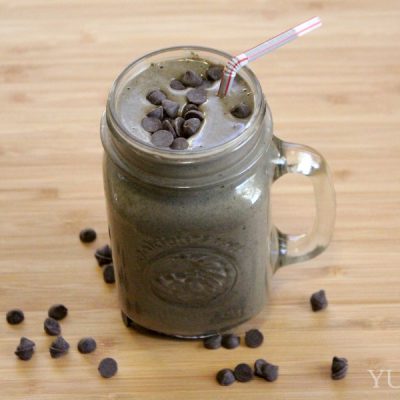 The best part about smoothies is that they are so versatile. I can’t tell you how many times I was at the bottom of the food bin only to find that my normal ingredients were gone and I was in desperate need of some shopping. I threw some things together and ended up with an amazing shake. Don’t be afraid to experiment with your ingredients and your blender!

If you’ve got some time to spare I highly encourage YUM fans to go check out some of the other “hot beverages” from this months Recipe ReDux.