My dear  mother pointed these out to me in a cookbook called “Company’s Coming Tonight! Magical Meals on Short Notice.” I’ve never seen or heard of it before but a quick search on Amazon proved to me that once upon a time there was a market for it! My mom is pretty good about finding cookbooks that are hidden gems.

These are simple and perfect as a holiday appetizer. I’ve got a secret for you though. I did not mean for them to be gluten-free or wheat-free. It just so happens that when I went to the store the baguette I purchased were a 2 for 1 sale.  But that’s ok right?  They turned out really yummy and honestly I couldn’t tell the difference. My picky eater club had no idea. The husband is not a fan of blue cheese. Kiddo can tolerate it in super small doses. It’s still a little strong for her. Both of them happily ate these up. We enjoyed them with a soup and salad lunch. Hey, what can I say? We had to test them out to make sure they were worthy of consumption before making them for someone else 😉  The recipe called for red/purple grapes but I picked green grapes instead. You could pick whatever grapes your tastes buds crave. I like the tartness of the green. It worked out well with the blue cheese. I’m a wine and cheese girl so this worked out in my favor.

There is also just a little bit of mozzarella melted on top of it all. This would also make a nice snack, especially for those of you following the Mediterranean Diet. (< About that link – I own that book and love it!)

I even had to make sure the blue cheese was gluten-free. Oh yea…it is! 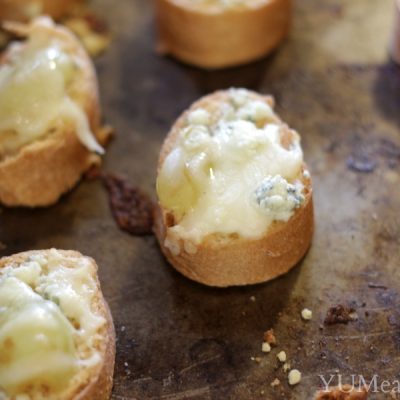