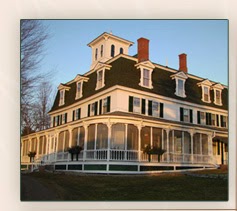 The other day my good friend sent me this article regarding an B&B (Inn) in Maine which was holding a contest for an author to write 200 words discussing why they would like to be the owner of the inn. In 1993, the current owner won a similar contest. She now wants to retire. The Inn is fully furnished, complete with

Some don’t know that owning my own B&B has always been a dream. I used to think that a restaurant was the way of life, but as I grew older I thought someday my accounting tax job would pay for the B&B. I would retire and the inn would allow me to be self-sufficient. I would spend the rest of my days in my little B&B while writing all of my fun stories.
I tried to win a contest last year for Amtrak and I didn’t get in. I wanted to win a house in Detroit from the Write A House program, but chickened out and never signed up.

Now, here is this chance staring me right in the face.

Problem is – what do I say? How do I gather my thoughts and get them narrowed down to 200 words?

I have no darn idea. But, I am going to try.

And for those of you who are wondering about hubs and kiddo – well he and I discussed that. While I am not expecting them to follow me, it would be nice if they did. And if they don’t, well I only am contracted to stay in the inn for a year. After that the choice to stay or leave is mine. Something tells me I probably wouldn’t want to leave. He understands this is an opportunity of a lifetime for me. We’ll just take each day as it comes.

That would be the ending chapter to my book.

I have set up a GoFundMe to help me with the $125 entrance fee.

Well, I turned in my entry. Thanks to my aunt and a few others who sent the funds for me to enter. Confirmation of my entry.

UPDATE #2: I’m sorry to say I was not the winner of this awesome contest. But, judging from the writing group chatter, it would appear the inn owner was covering up a few things and it all started to come to the surface.

Either way, good luck to the winner in whatever they decide to do.

« 4 Skinny Recipes for Snack Time #PutItOnARitz
#atozchallenge Do You Overthink? »